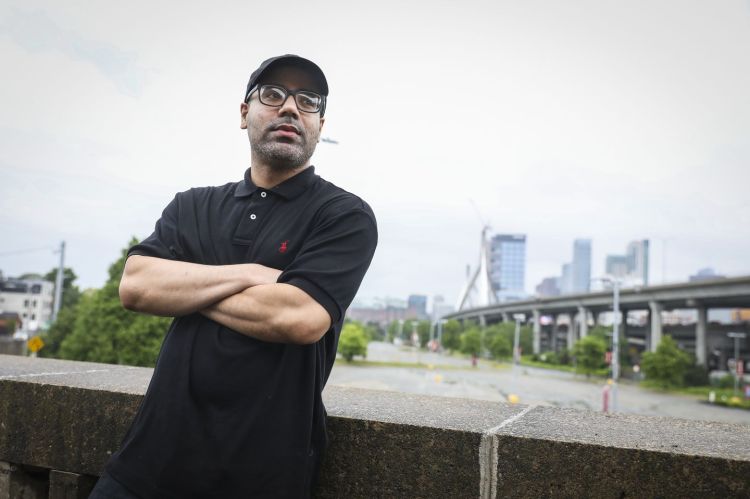 (Above photo: In 2020, Bunker Hill student Richard Brea was furloughed, got the coronavirus, and saw his father die from COVID-19. ERIN CLARK/GLOBE STAFF)

Originally published in the Boston Globe

Even before the coronavirus crisis, the economic collapse, the protests over racial injustice, life had been upended for Richard Brea, a 33-year-old student at Bunker Hill Community College.

Brea, of Lynn, had taken the spring semester off after a stressful fall juggling a draining job and coursework. Then the pandemic hit. Soon he was furloughed from work; then he caught the coronavirus. His father contracted the virus, too, and within weeks had passed away alone in the hospital.

Now, Brea is fixated on the Black Lives Matter protests unfurling across the country and the calls for equality and acceptance that he, as a Latino, has been pushing for long before police killed George Floyd.

“It kind of made school the last thing on my mind,” Brea said.

Brea is one of 12,000 students at Bunker Hill Community College whose lives and educations have been shaken by their campus’s sudden closure in March and the continuing tumult of 2020. More so even than at other schools, the repercussions of the pandemic have reverberated deeply at community colleges, which serve primarily part-time students who juggle families and jobs, and even in normal times struggle with basic needs like food, housing, child care, and transportation.

Bunker Hill, whose student body is more than two-thirds students of color and a quarter Black, has for years grappled with state budget cuts that have forced a growing share of the cost onto students who can least afford it, making it that much harder for them to achieve the social mobility that education promises. Over the past 20 years, the school has gone from being mostly funded by the state to mostly funded by students.

While most students at the many private, four-year colleges in Greater Boston will resume their studies this fall in one form or the other, that is not a guarantee at Bunker Hill, the largest community college in the state. Like Brea, many have lost jobs, family members, or housing as a result of the pandemic. Others lack a quiet place to study or a laptop and Wi-Fi. If circumstances become too difficult, they might never return.

“I worry about losing a generation … of the students who might have climbed up to a different socioeconomic level,” said Pam Eddinger, president of Bunker Hill Community College.

Eddinger, who has led Bunker Hill for seven years, said the rapid and chaotic shift to online education this semester reminded her of two things she already knew well. The first is that a community college is a social hub that — in normal times — connects students not only with education but with social services to help them break out of cycles of racial and socioeconomic inequality.

The second: “The rest of higher education really doesn’t understand who community colleges students are.”

The president, herself an immigrant to the United States, recently participated in an online forum with other local college presidents, many of whom run the large private colleges in Boston. The other leaders described how the pandemic had affected their study abroad programs and shared their elaborate — and expensive — plans to open in the fall.

“No Switzerland or Paris,” Eddinger said when it was her turn to speak, explaining that her campus will not reopen in the fall in large part because most students will need safe public transportation before that can happen. “Our dynamics for the fall are going to be tied very much to the dynamics of the city.”

In many ways, reopening in the fall is the least of Eddinger’s concerns. She is far more worried about something no one seems to want to talk about yet — the long-term economic fallout from the pandemic and how that will hurt the school’s ability to serve its marginalized students.

The switch to online learning necessitated by the pandemic was difficult for many students. Some did not have computers at home. Others did not turn on their video camera for a virtual class meeting, Eddinger said, because they were ashamed to let others see they were studying in a closet or other humble quarters. Some students persevered, but professors lost touch with others completely.

During the campus closure, Bunker Hill kept its campus food pantry open and delivered groceries provided by the Greater Boston Food Bank to the homes of about 50 students, she said. It also mailed an equal number of Stop and Shop gift cards to students, paid for with fund-raising from the school’s foundation. The college bought and distributed about 600 laptops and Wi-Fi hot spots to students. The school expects to need more computers as new students begin and the economy continues to suffer.

As the crisis drags on, Eddinger said she feels like she has more in common with the director of a local community health center or the Boston Public Schools superintendent, than with the presidents of Boston University or Northeastern.

In good times, Brea, the student from Lynn, thrives on his education. College was the last thing on his mind when he graduated from high school in Lynn, but after six years living in California, his thinking shifted. He moved back and dedicated himself to earning a degree in psychology so he can work with young people as a mental health specialist.

Balancing school and work has not been easy, but he found a champion in Evans Erilus, an educational case manager at the college who became a mentor to Brea. He introduced him to other men of color and has been a steady source of reassurance, especially after Brea’s father’s death.

“There were definitely plenty of times when I wanted to quit,” Brea said. “That’s when his encouragement would come into play.”

Brea is taking two online courses this summer, in nutrition and African literature. He will then need just four more classes to earn his associate’s degree. At this point, he doubts any of his classes will be in person. He misses meeting other students and the energy that comes from class discussions, but his father’s passing has propelled him to push through.

“My dad would want me to finish,” he said.

As Eddinger and her staff prepare for a fall when Brea and his fellow students will continue to log on from kitchens, bedrooms, and living rooms, she is watching the protests that persist on the streets of the cities where her students live. The themes — systemic racism and inequality — are ones she understands well. As people call to defund police departments, she and other community college leaders say they have fought the defunding of higher education for years.

“The idea that you can’t defund something — of course you can, they’ve done it to education. They have done it to community colleges,” said Sara Goldrick-Rab, a sociology professor at Temple University who studies higher education.

Over the past two decades, community college presidents have been forced to fund a growing share of their operating budgets with student tuition, as state support shrinks. In fiscal 2001, the state funded 68 percent of Bunker Hill’s budget, and student tuition (now about $2,500 per semester for a full-time student) funded just 32 percent, according to the college. Now those percentages have flipped. This year, student payments made up 66 percent of the operating budget and the state funded just 34 percent.

Eddinger is worried the pandemic will lead to not only more state budget cuts, as the Commonwealth faces a severe drop in revenue, but also a dramatic enrollment decline. A spokesman from Governor Charlie Baker’s office said no budget decisions have been made yet.

Goldrick-Rab, who has conducted research about Bunker Hill, called the college the “ultimate contrast” with the rest of the Greater Boston higher education landscape. Bunker Hill sits just 2½ miles down the road from Harvard University. MIT is one mile away.

Just one example of the inequity, she said, is that students at many four-year private colleges in Boston received more money per capita from the recent federal CARES Act relief package than students at Bunker Hill did. That is because the federal legislation, a response to economic fallout of COVID-19, was distributed on the basis of full-time equivalent students. Because private schools have more full-time students, those students received a greater share each.

Goldrick-Rab said the funding of community colleges is a political issue and people should keep that in mind when they vote and also when they consider if donations to private schools are where their philanthropy is most useful.

“There is racism. We have known this forever. There is racism in the funding of community colleges. Everybody knows who they educate,” she said. “It’s just quieter, it’s no less insidious.”

T.J Elysee, who navigated the switch to online courses this spring, said his family borrowed money from a friend to pay for classes this semester. That motivated him to persevere when the switch to online became difficult. He jockeyed with his 14-year-old sister for the family computer in the living room and watched lectures on his phone in his bedroom.

Elysee, 21, who moved to the United States with his family from Haiti after the earthquakes there 10 years ago, is working full time this summer delivering packages for Amazon and plans to keep that job when he starts classes again in the fall. After next year he plans to transfer to a four-year school to complete a nursing degree.

Eddinger is also thinking about the future, and how the economy will be forever changed by the pandemic. That will determine how the college will need to shift its offerings to meet the new needs in the workforce.

As she braces for state budget cuts caused by the coronavirus there are ironies not lost on her. The types of workers needed most during the pandemic, the ones relied upon most heavily, were many like Elysee — the nurses, CNAs, EMTs and other type of front-line, essential workers whose educations often began at a community college.

If a generation of students disappears because of the pandemic and its economic fallout, where will that leave the state?

“I struggle with their not understanding that the backbone of the workforce is here at Bunker Hill,” she said.