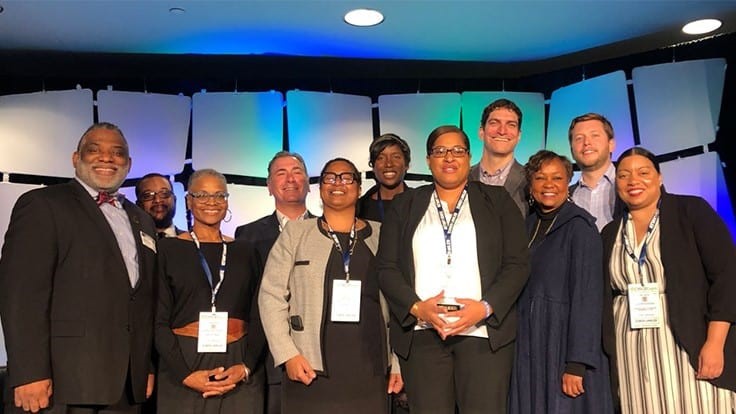 The public-private partnership will offer cannabis classes, internships and other programming to people who have been negatively affected by the War on Drugs or live in disproportionately impacted areas.

When it comes to social equity in Greater Boston, private enterprise and the voluntary sector aren’t going it alone. A public-private partnership is working to help people who were adversely affected by the War on Drugs obtain a foothold in the cannabis industry.

Launched in 2019, Mass CultivatED strives to help people who were arrested or incarcerated, have family members who had those same experiences, or live in an area where those experiences have had a disproportionate impact on the population. The program refers to them as “fellows.”

“When I decided to get one of these licenses and create a cannabis business, one of the things that I was aware of was the injustice and enforcement of those laws and of cannabis,” says Dr. Karen Munkacy, founder, president and CEO of Garden Remedies, a vertically integrated cannabis company in Massachusetts and one of Mass CultivatED’s partners. Many of those who are arrested and incarcerated for cannabis are minorities or people who are unable to afford an expensive attorney, she adds.

Pauline Quirion, director of the CORI and Re-entry Project at Greater Boston Legal Services (GBLS), another partner, says businesses and organizations are stating that “Black Lives Matter” and issuing statements in support of racial equality. Mass CultivatED is taking that a step further, she adds. “These are folks who are actually not just talking about racial equality, they’re doing something, they’re giving people real opportunities for employment and also for a career, which is really life changing, because if you think about the War on Drugs, it has had the biggest impact on communities of color.”

“We initially started thinking about creating some type of education program at a local community college to provide some training for people in the district who can learn a little bit about cannabis, learn a little bit about the failed War on Drugs and the laws that were getting put in place here in Massachusetts,” Dominguez recalls, referring to the medical and adult-use laws and corresponding regulations. That led to a partnership to offer classes at Roxbury Community College (RCC).

The Mass CultivatED team also realized legal services would be paramount and linked up with legal services providers such as GBLS and Lawyers for Civil Rights. “We started talking to them about providing some legal services upfront to help with record sealing and expungement for people who were transitioning from the criminal justice system and then trying to find work,” Dominguez says.

Mass CultivatED and its partners have interviewed people from Greater Boston and have selected seven fellows for its first cohort. During orientation week, the week of Labor Day immediately following the holiday, the fellows will take part in activities such as responsible vendor training and learning about RCC and ULEM’s services. They then will proceed through the program during the fall and graduate in December 2020.

The fellows’ first month will consist of education about the industry, Dominguez says. Mass CultivatED will provide laptops to every fellow and WiFi to those who don’t have it. (Due to the COVID-19 pandemic, education through RCC, workforce development training through ULEM and one-on-one consultations with the legal services providers will all be online.)

Following the first month, seven of the vertically integrated cannabis industry partners will train a fellow for eight weeks and pay them $18 an hour. Many of the fellows will train for four weeks in a dispensary and four weeks in a cultivation facility, Dominguez says; however, he says the program granted some flexibility to match business’ and fellows’ interests. For instance, Garden Remedies’ fellow expressed interest in cultivation, Munkacy says, and will spend much of the fall learning those ropes.

Garden Remedies so far has donated $25,000 to Mass CultivatED and was involved in designing much of the educational curriculum for the program, Munkacy says. Founded in 2013, the company has a 150-person workforce; 20,000 square feet of canopy space; a 81,000-square-foot, co-located manufacturing facility it is in the process of building out; and three medical storefronts, two of which also offer adult-use sales.

“There will be some general overview of the industry, but the goal of this [program] is to train someone so that they come out of this program either with a good-paying job and/or the ability to start their own business in this industry,” Munkacy says.

In addition to being able to work with a single employee or group of employees from day to day, fellows will also get a chance to meet with C-suite executives, Dominguez says.

Mass CultivatED will provide its fellows with additional support, he says. “Some of the other wraparound supports that we’ll be providing to them will be transportation costs to and from the facilities, childcare for some of our fellows who might need that, as well as things like financial literacy and helping people with their credit.”

In Massachusetts, as in other states, criminal charges and convictions can restrict people’s job prospects. But over the years, voters and government have worked to improve justice for people who possess cannabis. Eight years prior to the passage of Question 4 in 2016 to legalize adult-use cannabis, residents voted to pass a decriminalization measure making possession of less than an ounce of cannabis punishable by a $100 fine. In 2018, the Massachusetts Legislature passed an expungement bill allowing people to seal their record for certain marijuana cases involving possession of less than two ounces.

Since GBLS the CORI and Re-entry Project in 2008, Quirion and her colleagues have offered legal services to Greater Boston with a focus on the neighborhoods of Roxbury, Dorchester and Mattapan. Their work involves sealing and expunging records from Massachusetts’ Criminal Offender Record Information (CORI) database.

“It’s more beneficial to expunge, but the expungement grounds are much more limited than the grounds to seal records,” Quirion says. “In Massachusetts, there are two ways to seal records. If they’re old enough, you can use an administrative process where you mail in a form and you get them sealed; it’s seven years for a felony and three years for a misdemeanor.” The other method is to see a judge, who Quirion says will determine if sealing records is “in the interest of justice.”

A record in CORI doesn’t always refer to a conviction but can be a court appearance that didn’t result in a conviction. A record can influence not only someone’s work opportunities, Quirion says. Many parents can’t chaperone school trips for their children or attend ball games. “It comes up in every aspect of life,” she says. “If you want to volunteer at a soup kitchen at your church or wherever it is, it’s going to come up.”

GBLS provides pro bono legal services to Mass CultivatED fellows and is also responsible for some people entering the first class. “I participated in some of the interviews, and we all got copies of their materials and then had nominated a few of our clients who are actually going to be in this first class,” Quirion says.

She also commends Tyler for introducing a bill to expand expungement criteria. “For a lot of clients, the practical impediment we’ve run into is, when the police would stop people, before it was decriminalized, [if] they had stuff in their pockets, even though it was minor, they’d also charge them with distribution,” Quirion says. “If you had two little baggies and even if it’s an amount that’s decriminalized, what you’ve got on your criminal record is going to be not just the possession charge, but the distribution charge.”

Quirion says she hopes the legislature will expand the expungement statute to address charges that stem from possession, such as distribution, in the 2020 or 2021 state legislative session.

Following Mass CultivatED first class’ graduation in December, Dominguez says the program will bring on another class for fall 2021. The plan is to offer education through Massachusetts community colleges in the MACC network. Eventually, the program also may expand out to spring and summer terms.

Munkacy says the program will further expand to “increase the number of people that we train through this program, demonstrate that it’s a cost-effective program, take it statewide and then hopefully at some point take it nationwide. There’s a lot of interest and support currently for addressing social injustice.”