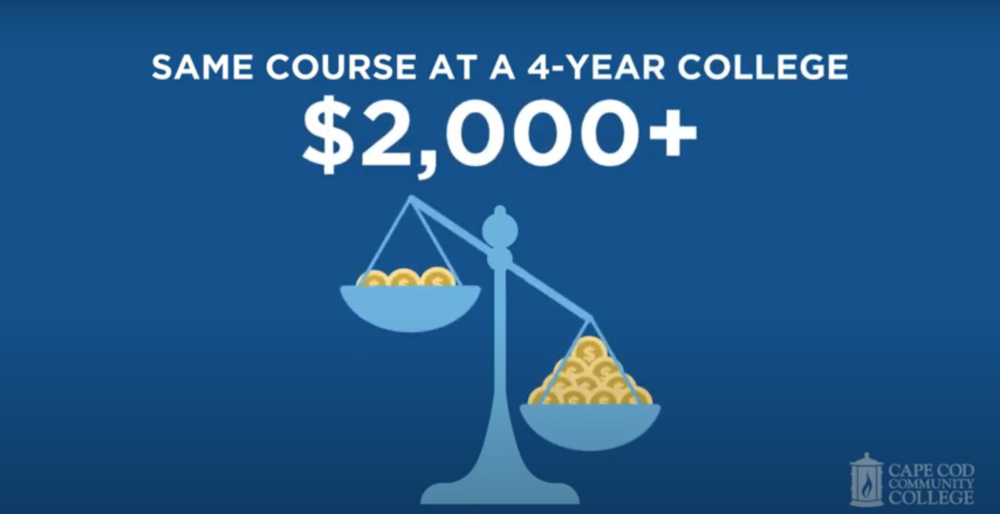 [Above Image: Cape Cod Community College online advertisement compares the school’s $670 per course cost to the more than $2,000 per course at many four-year colleges. (Screenshot)]

Read the article at WBUR

A summertime advertisement from Cape Cod Community College makes its case in plain financial terms: One course at the school will cost $670 during the upcoming pandemic-affected semester, compared to more than $2,000 at many four-year colleges.

Leaders at the 15 community colleges across Massachusetts made decisions months ago to move the vast majority of classes online this fall, a step that they said gave them ample time to prepare for the unusual academic year that’s about to unfold. Now, as many bachelor’s degree programs announce similar shifts, community colleges find themselves in a new position as the calculus behind where to attend higher education shifts.

With the traditional on-campus four-year college experience unavailable at many schools but price disparities remaining the same, Massachusetts Association of Community Colleges Council of Presidents Chair Jim Mabry believes the community college experience might “appeal to a wider range of students.”

“Community colleges are known for being nimble and being entrepreneurial, so we’re always looking for ways that we can explain to the larger community how we are accessible, affordable, our credits transfer,” Mabry, who is also president of Middlesex Community College, told the News Service. “If some people determine that staying closer to home is safer, a better option for them, more affordable — we want to be there to serve them and really help them.”

The COVID-19 outbreak upended the spring semester across higher education, and the highly infectious virus’s lingering presence in Massachusetts — combined with surging transmission elsewhere in the country — has prompted many campuses to plan for partial or almost entirely remote operations this summer and fall.

While exact approaches at the state’s community colleges will vary, Mabry said each school has moved between 80 and 95% of its courses online. Final system-wide impacts on enrollment remain unclear, too, given the uncertainty swirling around the fall, but many of the community colleges are hoping their recruitment pushes will be successful.

Mabry did not describe the push to highlight community colleges as an explicit COVID response strategy, but leadership and marketing teams across the campuses are in regular communication, and he said what they have to offer could now “appeal to a wider range” of audiences.

“With the environment both economically and health-wise having changed so much, we’re seeing that the basis on which students and their families make decisions change,” Mabry said. “If we can be there for them when they need a different option, we would like to provide them with access to an affordable, high-quality education that will keep their plans and their goals on track.”

At Northern Essex Community College, student headcount is on track to drop about 5% lower than it was last year, but officials believe August will bring an influx of new students who changed their plans last minute.

Leaders at that school, too, launched a marketing effort ahead of the fall semester aiming at those who need to make a career shift amid worst-in-the-nation unemployment, students reconsidering the benefits of a four-year college during the pandemic, and those who are interested in transferring to Northern Essex.

The school spent $500,000 to help shift about 90% of its classes online, which officials hope will make it a more competitive option.

“Graduating seniors may be anxious about the cost of a four-year college, especially with the full college experience in doubt,” a narrator said in a advertisement, pointing to the community college’s close-to-home location and its comparable affordability.

Community colleges have rolled out stories of students who reversed course on plans to attend four-year schools to drive home their argument. Ludlow graduating senior Sara Maria, who was the subject of a feature on Springfield Technical Community College’s website, will now opt to spend two years at STCC before transferring rather than heading straight to Syracuse University.

Maria told the school’s press team that she had been weighing a local start before the pandemic, but once COVID altered the landscape, the cost factors became even more obvious.

Before the pandemic hit, many Massachusetts public colleges and universities faced budget pressures and declining enrollment.

The COVID crisis has sliced deep cuts into those already-strained systems. In the UMass system, for example, officials will lay off more than 500 workers and furlough thousands to close a $264 million budget gap while freezing tuition.

Mabry said community colleges have also had to implement layoffs, though he said he could not provide an estimate of how many positions were affected or of the system’s exact financial outlook.

During previous recessions, community colleges experienced an uptick in enrollment as many laid-off workers went back to school to gain new skills in an attempt to find employment. That pattern may not repeat this time around, though.

“We’re seeing a lot of people postpone or delay their decision about going to school,” Mabry said. “There’s a lot of uncertainty, so we’re all contacting our student base, and a lot of them are saying, ‘I just have to figure that out, I’ll get back to you.'”

Most concerning to Mabry are the impacts on the low-income and first-generation students that make up the base of the community college system. Many of those families, he said, might not have the resources to pay for school amid the intertwined public health and economic crises, even though campuses will make discounts and other support programs available whenever possible.

Community colleges will need support from federal and state leaders, Mabry said, arguing that they are crucial to whatever path Massachusetts will take out of the depths of the emergency toward a new normal.

“If we’re going to get this economy back on track — the high-tech, high-skilled economy that drives the standard of living in Massachusetts — we’re going to need a workforce,” Mabry said. “We want to have the ability and funding to be able to train those workers and really help jumpstart the economy when it’s ready to get back on track.”