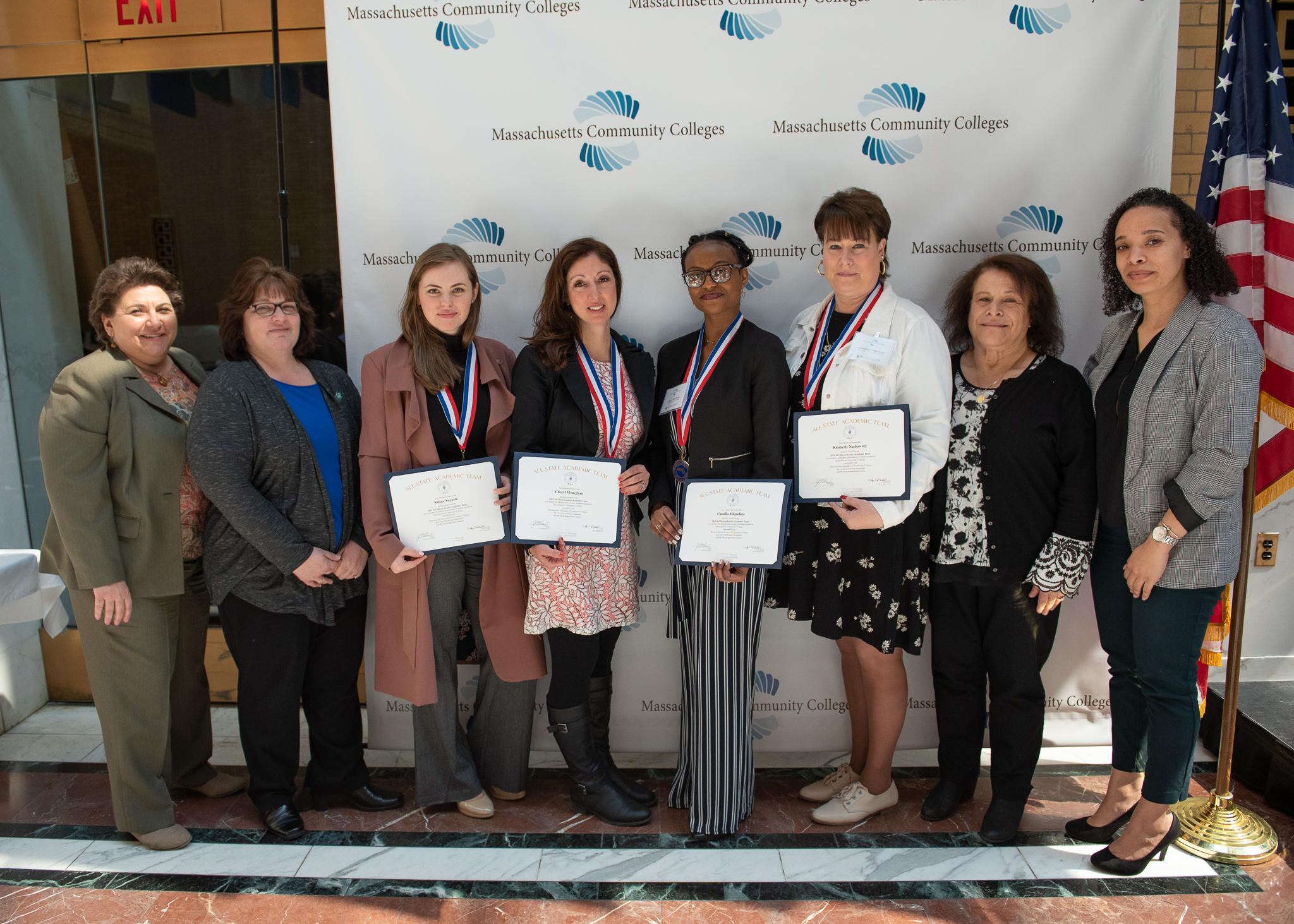 BOSTON – The Massachusetts Association of Community Colleges (MACC) hosted a ceremony at the Massachusetts State House to honor some of the highest academic achievers of the community college system during the 2018-2019 academic year. Surrounded by family, college presidents, elected officials, and mentors, the student awardees were presented with medallions and certificates for being named to Phi Theta Kappa’s All-Massachusetts Academic Team. Every year, MACC hosts this event at the State House in Boston to showcase the nationally recognized students of the 15-college system. The event is co-sponsored by the Phi Theta Kappa international honor society and the Coca-Cola Foundation. Tuesday’s event took place in the Great Hall of Flags of the State House and featured remarks from Dr. Patricia Marshall, Deputy Commissioner for Academic Affairs and Student Success at the Massachusetts Department of Higher Education. Dr. Valerie Roberson, president of Roxbury Community College, served as the master of ceremonies.

“Every year, this event highlights some of our most exemplary students,” said Dr. Roberson. “These individuals have demonstrated outstanding academic achievement and will be leaders in their future careers. We look forward to seeing their continued accomplishments at four-year institutions, in the workforce, and in their local communities.”

The student receiving the highest All-USA Academic Team application score in each state is named a New Century Workforce Pathway Scholar or a New Century Transfer Pathway Scholar. Students nominated for the Workforce Pathway are planning to enter the workforce after completing a certificate or associate degree, and students nominated for the Transfer Pathway are planning to transfer to the four- year college after graduation. Romina Gjacaj from Bunker Hill Community College was this year’s New Century Workforce Pathway Scholar. She was awarded a $1,250 scholarship for this honor. Also, Bunker Hill Community College student Cam Do was this year’s New Century Transfer Pathway Scholar. As the top-scoring community college student in the Commonwealth, she was awarded a $2,250 scholarship from the Coca-Cola Foundation. Finally, Ms. Do was also recognized for her academic achievement and service to the campus community as an All-USA Top 20 Scholar. She is one of just twenty students from across the country that is a member of this select group; she receives a $5,000 scholarship for this accomplishment.

Phi Theta Kappa (PTK) is the international honor society of two-year colleges. PTK has recognized and encouraged scholarship among community college students for 100 years while promoting the academic integrity of the associate degree program. Students with grade point averages of 3.5 or higher are invited to join Phi Theta Kappa.