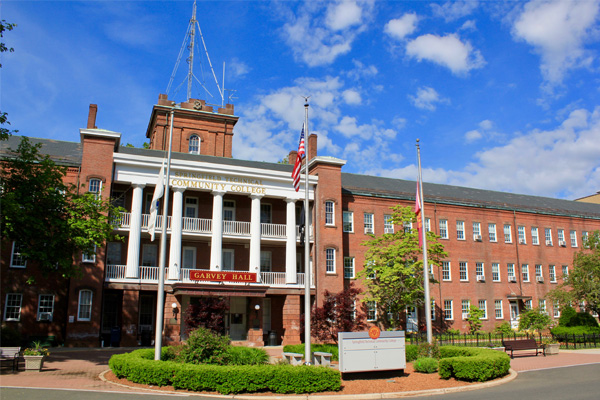 Sara Maria, the daughter of a school custodian in Ludlow, Massachusetts, didn’t receive as much financial as she needed last spring from her dream school, Syracuse University.

“I was actually looking at it since my freshman year of high school,” Maria, 18, said. “I want to go into marketing and business management and communications, and they’re really good in that realm.”

So she began to waver and to take a second look at her local community college — Springfield Tech.

“I didn’t want to be in debt for a long time, because, with marketing, it depends on what business you go into with salary,” she said. “So it’s not steady.”

Then COVID hit, the economy collapsed, and nothing seemed steady. Her family lost income, Syracuse moved its spring classes online and then announced it would welcome some students back this fall.

“I just knew that I didn’t want to be on campus with a ton of different people and I wanted to keep me and my family safe,” she said.

Maria chose Springfield Technical Community College instead. She is not alone in doing this college cost and health calculus. A survey out this month finds four in ten incoming freshmen at four-year colleges are likely — or highly likely — not to attend. These students say this is because, in part, they don’t trust their peers to follow health safety guidelines and their families don’t want to pay full tuition as more colleges, from the University of North Carolina at Chapel Hill and Notre Dame to Michigan State University and Columbia University, announce most classes will be online.

Community college leaders are hoping this shift in enrollment trends will offset a steep drop in adult learners who are stepping away because they’ve lost their jobs, income or child care.

Researchers, though, say the enrollment math is not so simple, because the situation remains so fluid.

“We’re not actually going to know what the real picture is until students actually show up on day one of classes,” said Michael Horn, co-founder of the Clayton Christensen Institute and author of the book “Choosing College: How to Make Better Learning Decisions Throughout Your Life.”

“A lot of families have been saying over the summer that they can’t afford their first choice school or that they’re concerned about traveling far distances, given quarantines, and so families are thinking, ‘Hey, community college may be a better bet for the first semester — for the first year,’” he said.

The idea is to earn at least some college credits and then transfer them to a four-year school, if it will accept them.

“Oftentimes schools actually will not accept all those credits or they’ll put weird hoops around them where they say, ‘Oh, yeah, counts for credit, but not toward your major,’” Horn explained. “And so therefore, it actually doesn’t help you graduate on time.”

So some students are wary of committing to a community college that doesn’t cost a lot of money, if it means they’ll be in school longer.

A WGBH News survey of community colleges in New England finds many are fielding questions from students who are reconsidering their fall plans, and most expect enrollment to drop at least 10 percent from last year. At Community College of Rhode Island, for example, administrators are tracking enrollment daily, if not hourly. Its enrollment is down nearly 20 percent. Some community colleges in Massachusetts are seeing similar projections.

“Everyone is saying enrollment is down,” said Davis Jenkins, a researcher who studies community colleges at Columbia University.

Jenkins said before the pandemic, community colleges in Massachusetts were losing students to public and private four-year colleges.

“In a state like Massachusetts, and especially in the urban areas of Massachusetts, increasingly you need a bachelor’s degree even to enter fields and often to advance,” he said.

During the pandemic, Jenkins predicts, newfound interest in community colleges among recent high school graduates won’t offset enrollment declines, even with so many unemployed adults in need of retraining.

“I don’t see it happening,” he said. “The increased competition will mean that certainly the private non-selective four years are going to be discounting their tuitions, because many of them are fighting for their lives.”

Maria enrolled in three online summer courses at Springfield Tech to get a head start.

“I finished macroeconomics, a world religions class and a business calculus class,” she said.

She has done some back-of-the-envelope math. If she spends two years at Springfield Tech, stays at home to avoid paying for room and board and then transfers to UMass Amherst and gets a tuition break from the state, she estimates she’ll save nearly $200,000.

“So basically a house,” she said.

Springfield Tech President John Cook says like most colleges, the school is preparing for a drop in enrollment this fall, but his admissions staff is hearing from more and more students who had planned to go to four-year residential colleges.

“We continue to showcase our affordability to the many students and families considering their options,” Cook said.

Even before the pandemic, a WGBH News survey found a majority of Americans would recommend community college over taking out loans for a four-year college.